Labiaplasty is performed by a gynecologist, many apparent problems caused by various genetic factors, or obesity and slimming, and even multiple births, can be removed by this surgery.
This surgery is considered as a vaginal cosmetic surgery, examines the internal and external problems of the vagina, which can reduce the size of the large lips or narrow the vaginal opening in a woman who has been affected by the increase in age or childbirth. Vaginoplasty and labiaplasty can be one of the most important cosmetic surgeries in women, because they increase self-esteem and is motivation for having sex with spouses.
Many women who suffer from the appearance of large lesions in the genital area can do away with extra tissue and hangover of the area by performing a labiaplasty surgery by the gynecologist and obtaining a completely beautiful appearance from the surgical outcome. This surgery also makes penile rejuvenation in women and gives a better sense of it to the patient already.

Before you decide for labiaplasty, it’s better to know some points, so you can make the right decision about it. Most people suspect that they will diminish the genital tract, but this belief is completely wrong. Because this does not have to do with self-esteem and it’s a natural problem. Also, the size of the small lobe of the genitals is not related to sexual desire.
Some women also worry about their lips’ lack of symmetry, but you should know that this is common and there is no need to compare your genitals with the organs of others. 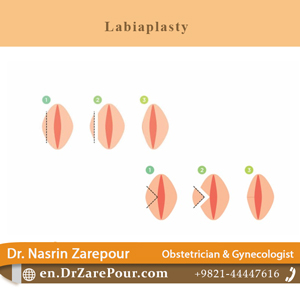 labiaplasty- before and after

After performing the vaginoplasty, it is necessary to consider some cares. We’ve brought some of the post-operative measures here:
use prescribed drugs to reduce the pain.

Someone should be with you. You may not to walk lonely.

Rest at home for about 1 week, and avoid to do heavy activities and exercises, for about 1- 2 months after surgery.

Drugs should be used under a gynecologist attention.

Incisions will be faded after 1- 2 months. You can use some topical creams and lotions.

Labiaplasty is performed by a gynecologist, many apparent problems caused by various genetic factors, or obesity and slimming, and even multiple births, can be removed by […]
Do you like it?0
0 Read more